Conference on the Future of Europe -Beginning of a New European Union?

The recommendations introduce fundamental changes in administrating the EU. These changes will push the Union towards deeper integration and internal consolidation, strengthening supranationalism through expanding the competences of EU institutions. The recommendations also call for reinforcing the European identity and the further democratization of the Union”. 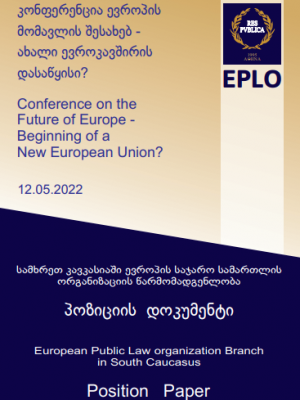 Bilingual paper “The EU and the War in Ukraine” 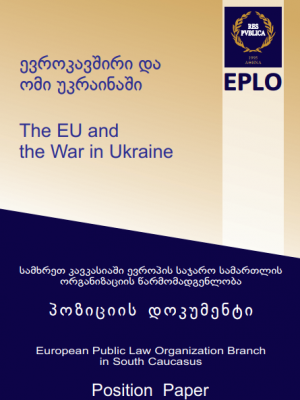 Configuration of the Council of the European Union

Currently, applications of Ukraine, Georgia and Moldova for the EU membership is being discussed within the Council of the European Union. Therefore, readers from “Association Trio” would be particularly interested to learn more about formats of the Council and its structures. 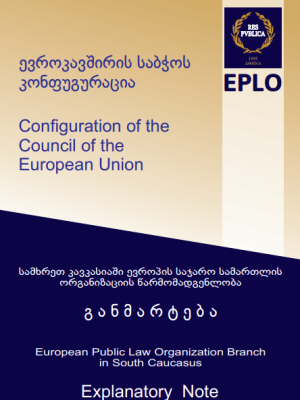 The ongoing war on Ukraine forced the European Union to take extraordinary decisions towards its eastern neighborhood. Recently, the Union invited Ukraine to submit its application for the EU membership. On February 28, 2022 President Zelenski signed the official application and sent it to EU institutions.

In the following days, Georgia and Moldova also applied for the EU membership. Currently, the “Association Trio” looks forward to Union’s responses. The process differs from the typical EU accession process.

Therefore, through its “Explanatory Note”, the EPLO branch in South Caucasus is pleased to share main legal and administrative aspects of the EU accession trajectory. 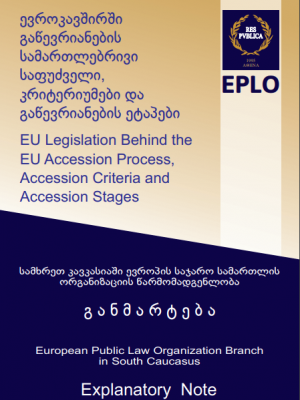 The Rule of Law is one of the fundamental values of the European Union. Article 2 of the Treaty on the EU names the Rule of Law among EU founding values such as respect for human dignity, freedom, democracy, equality, etc.

The EU believes that it may not function unless Rule-of-Law norms are guaranteed. The Union is also convinced that breaches of such norms pose existential treats to the European Union. Thus, the
protection of the Rule of Law is a priority for the EU within the Union and beyond.

In recent years, the EU has been expressing its Rule-of-Law concerns towards various European states, including Georgia. In 2020, the Union decided to hold back the second tranche of macro-financial assistance to Georgia on Rule-of-Law grounds. To this end, whether or not the decision was a “punitive” measure remains as an open question for some representatives of Georgian society. As we will see below, the EU takes such decisions entirely in accordance with EU law and practices. 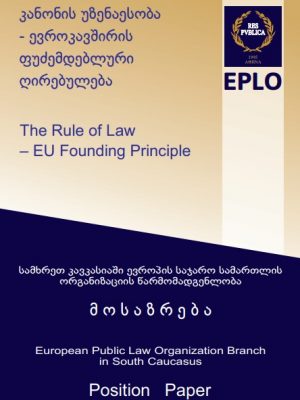 Conference on the Future of Europe

Currently, the main focus of the European Union falls on yet another Russian military adventure against Ukraine. The imminent threat of a new military  confrontation in Europe significantly changed the EU foreign agenda and also, to a significant extent, weakened the international attention towards some important  developments in EU internal policies.

There is an ongoing Europe-wide discussion with a very important mission – to shape the future European Union. Unfortunately, the event of such scale seems to be left without appropriate attention from the part of Union’s eastern neighbors. 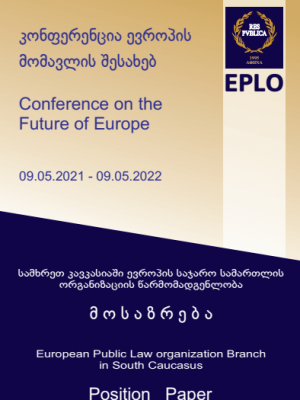 The EU’s Relation with Its Eastern Neighborhood

This paper attempts to analyze the evolving relations between the European Union and the so-called “Association Trio” (hereafter Trio) of Georgia, Ukraine and Moldova which signed with the EU Association Agreements including the Deep and Comprehensive Free Trade Area. The work also discusses those relations regional developments vis-à-vis these countries from the beginning of the 2000s.

The goal here was to illustrate, through the lenses of EU presidency programs, how the relations between the Union and the regional states have been  eveloping for the last 20 years. At the same time, the authors attempted to underline the significance of such EU documents which reflect the Union’s main priorities as well as practical measures for their implementation. The EU presidency programs are indeed strategy  documents which shape the European Union’s work  in the short and medium-term.

Therefore, the authors argue that such documents deserve a special attention and an organized, coordinated work is required for ensuring that the presidency work programs duly cover the EU’s Eastern Partnership region.

This publication is the first scientific work of the EPLO regional branch which has been published with the support of a member of the Scientific Council of the branch, the Ivane Javakhishvili Tbilisi State University. The publication offers knowledge about the European Union which, as the authors believe, is imperative for comprehending the EU as a unique international player and its institutional setup and decision-making toolbox as well as also understanding the EU accession process specificities, etc.

This publication discusses the relations between the EU and its European neighborhood from the perspectives of the EU Eastern Partnership Initiative participant association countries, makes a comparative analysis between the Eastern Partnership Initiative and the Stabilization and Association Process for the Western Balkans, recommends practical measures for stepping up the EU enlargement track, describes the division of the legislative and the administrative competences between the EU and its member states and underlines the role of EU institutions in such competence-sharing. 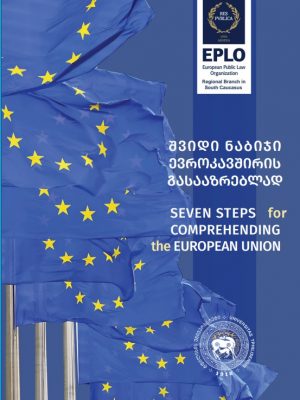 On January 15, 2021 an Agreement on the status of the EPLO Regional Branch in South Caucasus was signed between the MFA of Georgia and the EPLO. The international agreement was submitted to the Parliament of Georgia for ratification.

The issue was discussed by several standing committees, including committees for Foreign affairs, Legal issues, Education, European Integration, etc. All respective committees gave their consent to ratification of the agreement.

On March 30th 2021, by the Decree of the Parliament of Georgia N 431 the agreement has been ratified and came into force. Thus, Privileges and immunities enshrined in the UN convention on Privileges and Immunities of 13 February 1946 have been granted to the branch, its officials and staff, as well as activity, property and assets. The Branch has been included in the diplomatic list of the MFA of Georgia.