Professor S. Flogaitis was also received by the Minister of Justice Mr. Josip Grubeša and the Deputy Minister of Foreign Affairs Mr. Josip Brkić who, once again, confirmed Bosnia and Herzegovina’s commitment to the Organization and his willingness to further explore ways for mutually beneficial areas of collaboration in the fields of education, research and technical cooperation.

During the meetings that took place in Sarajevo, Professor S. Flogaitis presented the European Public Law Organization and its work in the fields of education, research and technical cooperation, its active presence in the country through activities and projects and its premises in Brčko and expressed his willingness το strengthen this presence with new collaborations in the above areas.
In Sarajevo, Professor S. Flogaitis had a meeting with the Ambassador of the Republic of Italy, Mr. Nicola Minasi with whom he discussed the activities of the EPLO in Bosnia and Herzegovina and the possibilities of their expansion through new projects. 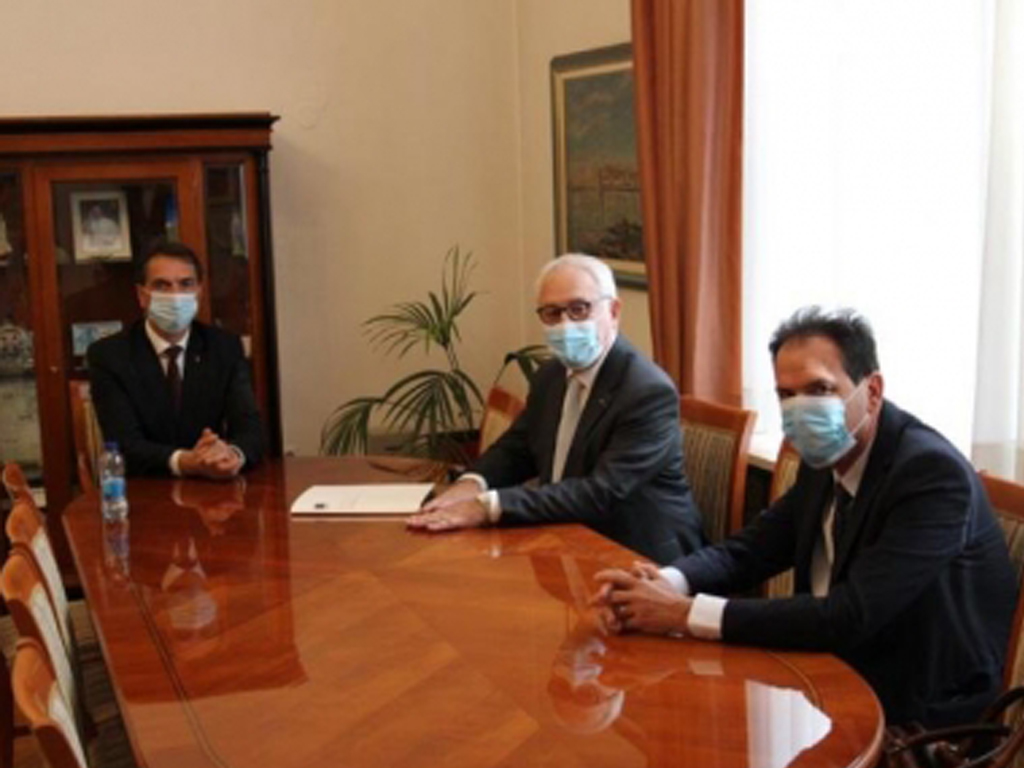 The Director of the EPLO also met with Mr. Dzerard Selman,President of the Constitutional Court of the Sebian Republic of Bosnia and Herzegovina and other members of the Court, in Bania Luca. The meeting evolved around the presence and the activities of EPLO in Bosnia and Herzegovina and particularly in Bania Luca and the willingness of both sides to seek collaboration in the areas of education and research was confirmed.

While in Sarajevo Professor S.Flogaitis had a fruitful meeting with professors Milan Kulić, Rector of the University of East Sarajevo Goran Markovic, Dean of the Faculty of Law, Marko Gutalj, Vice-Rector for International relations, Jelena Krunic, Vice-Rector for Scientific Research and Slobodanka Krulj, Coordinator for International cooperation during which the longstanding close collaboration between EPLO and the University was confirmed while new forms of collaboration in education and research were discussed. In Brčko the Director of EPLO was received by the Mayor mr. Siniša Milić to whom he offered his gratitude for his continuous support and expressed the intention of the EPLO to become fully operational in its Brčko premises through new academic and research programmes.

Director S. Flogaitis also stated that the EPLO is very happy to contribute to the fight of the country against the corona virus by hosting the covid-19 report service in the ground floor of its premise in Brčko for as long as needed for the country to confront with the urgent challenge and protect the local population. The meeting concluded heartingly with an agreement for the renewal and expansion of the collaboration between the Brčko local authority and the EPLO. In Brčko Professor S. Flogaitis had a working meeting with the academic professor Dr. Nedeljko Stanković, Rector of the European University of Brčko. The meeting was held at the premises of the European University and officially marked the beginning of cooperation between these two institutions to include among other things the possibility of introducing joint degree and dual degrees programs in the field of law and public administration as well as in internship programmes and summer schools.

During his visit to Bosnia and Herzegovina the Director of EPLO was accompanied by the newly appointed EPLO’S Head for Brčko Mr. Panagiotis Alexopoulos.

The EPLO has in many cases cooperated with the international community and in particular with the Office of the High Representative and through a series of projects, organized visits of international experts to the District to work with all relevant stakeholders towards this direction.

EPLO experts assisted in the institution building process of the Brčko District by teaching in seminars organized for the local Assembly Councilors. According to the needs of the Assembly, the EPLO organized seminars on the harmonization of the local legislation with the acquis communautaire at a time that the Brčko Assembly was passing important legislation for the District.

The EPLO experts collaborated with local councilors to transfer knowledge on legislative drafting. The aim of this training was to stimulate the Councilors to contribute to the codification process in the District by proposing draft legislation themselves and acting proactively, rather than simply waiting for the Government’s Legal Team to propose draft legislation. The concrete outcome of this activity is the Law on Councilors, which was introduced in the local Assembly.

The EPLO contributed to the efficiency of the Assembly’s work by reviewing the Rules of Procedure of the Brčko District Assembly and worked with Councilors on necessary amendments. The changes introduced during this process mostly referred to the scheduling of the Assembly sessions, deadlines and other practical issues. The solutions proposed by the EPLO were officially voted on and accepted by the Assembly and are still in place.

The EPLO organized a seminar for the Councilors on the importance of the use of modern technologies in providing services to the citizens. The principles of e-governance and the possibilities offered by the latest IT achievements were presented to the Councilors, with an aim to inspire them to think about future technology solutions and adapt legislation to the newest trends.

Moreover, the Mayor of Brčko District and the Representative of the District to the EPLO regularly took part in the EPLO Board of Directors Meeting and the Annual Conference of the EPLO’s European Scientific Council. Furthermore, the EPLO supported the Brčko District Tax Administration in the process of taxation reform, by organizing in Brčko, seminars carried out by EPLO experts, as well as a study visit to Greek institutions dealing with taxation. This activity was implemented with a view to assist the local economy by introducing some of the solutions already applied in the European Union member-states.

With regards to the judiciary, the EPLO has assisted in the development of the new Book of Rules on the Internal Organization of the Brčko Courts, including a development of a full list of administrative positions within the new judiciary. Several manuals were developed for the purpose of streamlining the work of the judiciary.
Digital sound-recording of the court hearings was introduced on the EPLO’s initiative, ensuring better access to justice by allowing all parties to receive the digital recording of the hearings.

EPLO experts also organized training sessions for the administrative workers of the judiciary on issues such as the Code of Conduct to ensure that the highest quality customer service is offered by the Brčko District judiciary.

Mediation, as one of the modern instruments for dispute resolution in the Basic Court was introduced and strongly supported by the EPLO, which contributed to the backlog reduction and better results.

-EPLO experts from Greece, Bulgaria, the United Kingdom and the Netherlands held a total of 5 seminars with the purpose to inform the audience about the institutional functioning of the EU, EU anti-corruption policy, communication and cooperation of the law enforcement agencies in the EU, EU immigration policy, and the legal impact of the EU legislation to the legislation at a national level.

During the years 2013-2015 the EPLO as a leader undertook a Funded Project by the European Commission on Development of Central Bodies of Governments in Bosnia and Herzegovina
The objective was to contribute to a reformed and efficient public administration in Bosnia and Herzegovina, capable of supporting the country’s EU integration process by enhancing capacities of the state and entity administrations in the areas of policy development, policy planning and policy coordination.

Specifically, to assist the governments in Bosnia and Herzegovina to implement the model of public administration development as described in the ‘Blueprint of development of central bodies of governments in Bosnia and Herzegovina’. The ‘Blueprint’ provides concrete recommendations on how to develop the secretariats at the level of the State, the entities and the Brčko district into full-service institutions capable to manage the policy system on behalf of the governments in accordance with the best European practice.

The BNSPA, an institution of higher education

Is an agency of the EPLO developed as a graduate training school for civil servants, elected members of the local authorities and judges of the administrative justice. It addresses all those interested in obtaining a Master’s Diploma in national, comparative and European administrative law and administrative science, as well as training seminars for those who wish to develop their skills in a specialized public administration area including civil servants, professionals and experts that deal with the public sector in their everyday professional life.

During the academic year 2017-2018 a series of Conferences and Lectures on European Law, Policy, History and International Trends addressed mainly to students, members of the Administration, and to the community were conducted monthly as follows: